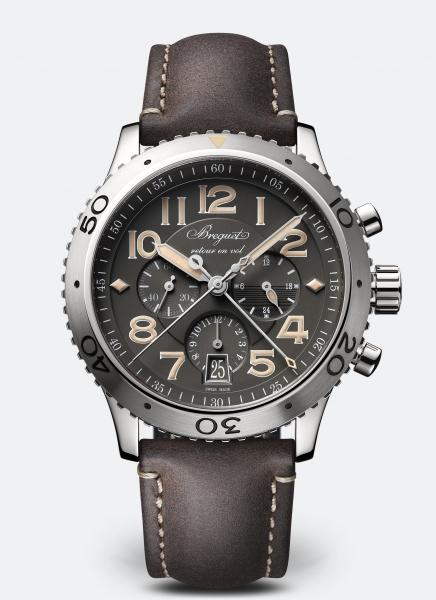 What Abraham-Louis Breguet set out to achieve was at once simple and highly ambitious : a watch which would wind itself, without the aid of a key or any other external agency. In his customary fashion, Breguet never laid claim to either the idea or the term “perpétuelle”, taking credit merely – if that is the appropriate word – for the invention of a system that was reliable and effective : an oscillating weight “à secousses” which responded to the wearer’s movements and ordinary walking. The oscillating weight, sprung so that it returned to its original position after each movement, pushed up two going-barrels, stopping when the springs were fully depressed.

A watch that both measures and displays elapsed times and shows conventional time. The chronograph mechanism, driven by the movement of the watch, controls a centre seconds hand that can be started and stopped to time an event. A subsidiary dial records the elapsed minutes. Two pushpieces in the caseband serve to operate and return the chronograph to zero.

With his “chronomètre à doubles secondes, dit d’observation”, developed in 1820, which permitted the measurement of intermediate periods or of the length of time taken by two separate and simultaneous events, Breguet anticipated the modern chronograph.